We’re ten games into an incredibly exciting Premier League season (ed. note: due to the extremely intensive nature of fashion data collection, there's a two match lag between matches played, and data collected so all numbers are current as of match day ten) and we’ve amassed just enough data for folks to produce thoughtful and nuanced insights. We know that Manchester City is ludicrously good but there may still be a race for the title, we can see what an Arsene Wenger-less Arsenal looks like, we can place better bets on when Jose Mourinho will get sacked. But, I hear absolutely no one cry, have we also reached a point where we could analyse, understand, and make predictions based on completely unfounded metrics? Absolutely.

Would Wolves be netting more of their shots if they dressed like actual wolves? (They’ve scored about 6% of the shots they’ve taken so far, and I’m sure real wolves have a much higher conversion rate.) Would Mourinho be having a better third season at the helm if United’s pink were just a shade hotter? Did Arsenal come together under a new manager when they switched from the usual red to their plum away kit? Can we predict this season’s winners based on what their first, second, and third kits are? No. The answer to all these questions is no.

Does that, however, mean that someone shouldn’t painstakingly grade every kit that’s been worn so far and see what insights we can gather from the data? Absolutely not*.

*To be clear, I mean "yes, we should." English is a very confusing language.

Before we dive into the data, we should establish that there is absolutely nothing scientific about the methodology or the analysis. The data collection isn’t consistent, and there were definitely teams whose kits were ranked poorly based on how irritated I was to be seeing the same thing again and again. It should go without saying that all data gathered is subjective and none of it is reproducible. Football kittery is also a struggling artform (if you aren’t the Super Eagles), so the ranks assigned to kits had to account for a lot of monotony and reward attempts made. The scores were assigned as follows:

The team with a winning strategy and kit

We should start with Watford: the only team in the Premier League brave enough to dress like a member of the animal kingdom -- a bumblebee. Watford have had an excellent start to the season and are sitting pretty at 7th. Sure, they were at a similar position 10 games into the previous season, but this season has been a completely different beast. For one, there are only seven points between the Hornets and table leaders Manchester City. This time last season, that difference was thirteen points. Watford have been playing consistently excellent football with six pretty convincing wins so far. It’s unclear whether their form has been a result of their home kit’s touching homage to an endangered species, but how else can you explain Watford’s 2-0 victory against Wolves, a team that clearly has no regard for its namesake? Sure, we can look at the xG sum for the game (it was 0.68-0.79), but how do you think they got those stats int the first place? Bees. It was the bees.

Watford also has the highest mean kit quality (kQ, if you will)* in winning games as a result of their second kit: a lovely deep green with neon green trim. With colors like that, it’s really unlikely that the Hornets are going to stumble anytime soon this season.

Much to everyone’s chagrin, but absolutely no one’s surprise, it’s the two teams that have discovered a winning formula that are top of the league. Manchester City are a force to be reckoned with (even more so than normal), and Liverpool are trying to match them step for step. Apart from having a near-perfect start to the season, both teams also opted to preserve their classic look. City’s pale blue and Liverpool’s red home kits have clearly been chosen as a form of psychological warfare where opposition teams begin quaking in their spikes any time they see the colors. And that’s it. That’s all those kits have going for them.

The battle for the title can’t rely on just that, though. Just because it’s not broken doesn’t mean a little glitter won’t hurt. Take Liverpool: they’ve almost entirely won games on a kit graded as inoffensive, except for a single game where they came out kitted in dishwater*. Their goal difference is also 8 fewer than City, who have been slightly more liberal with their use of their away and third kits (both of which are nowhere near as plush as Liverpool’s purple and pink away number). Will that help Liverpool stop City? Probably not, given City are just that good, and while Liverpool certainly seem better than last season, it’s unlikely that they’re good enough. But hey, at least they can look spiffy while they try.

*I had initially ranked that kit as being memorable because I thought it’d be seared into my skull forever, except between last Tuesday and Thursday, I promptly forgot about its existence. Presumably, my brain took into account the other horrors we’re currently surrounded by and decided to cut me a break on this one. 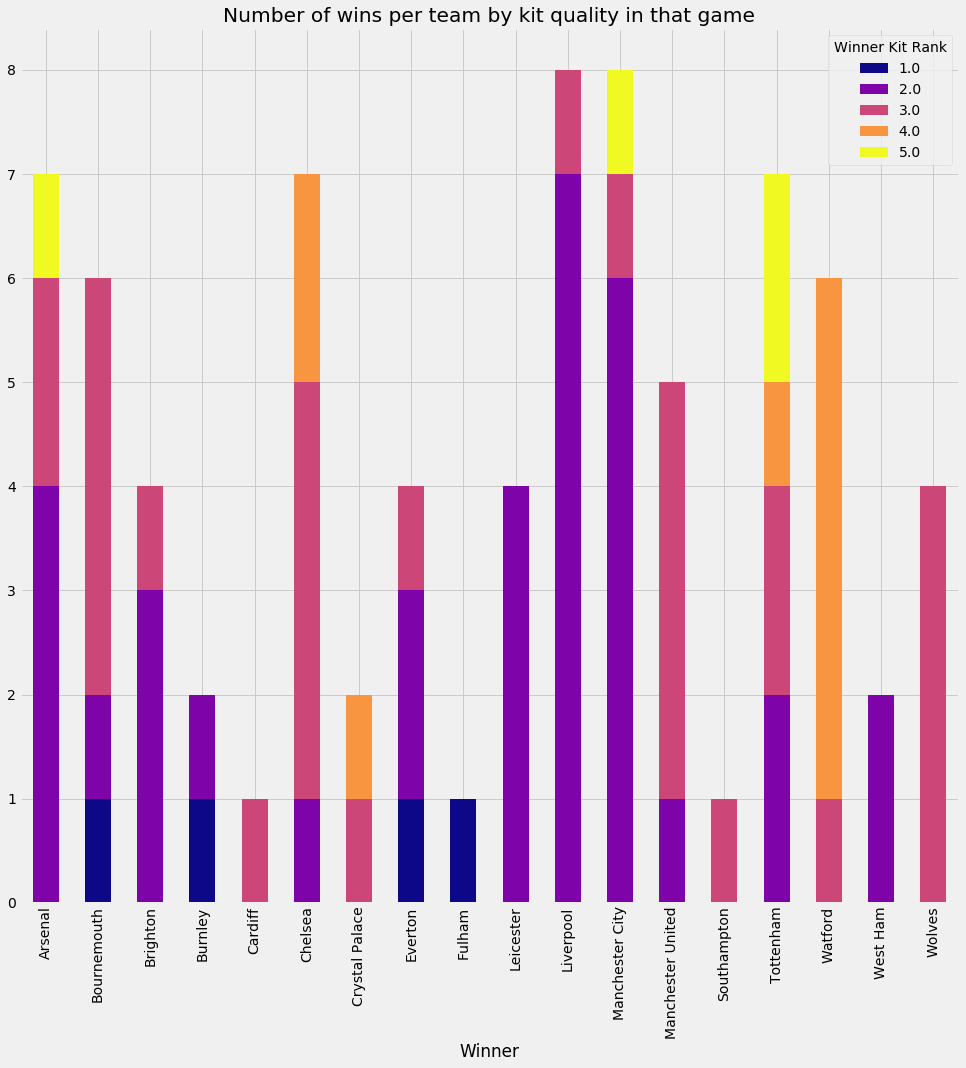 And while we’re talking about second kits, we can’t ignore everything that Arsenal and Chelsea are doing, both under new managers. Maurizio Sarri’s Chelsea and Unai Emery’s Arsenal are at third and fourth on the table, both with seven wins. Arsenal, however, have lost two games so far this season, possibly* because -- unlike Chelsea -- they didn’t kick off their season in their away kit. Chelsea’s away kit this year is a bright yellow that was clearly chosen to look amazing on N’golo Kante and very few other people, presumably in deference to his overall awesomeness. Chelsea also had their biggest victory (4-0 against an inoffensive Burnley) in that kit. Similarly, Arsenal’s biggest win came in their plum kit (5-1 against a frankly drab Fulham). There is a lot of hand-wringing about when exactly this Arsenal side will stop winning unconvincingly and finally collapse,

*The word ‘possibly’ really can cover all manner of sins

There’s something about United

It’s really hard to talk about this season without mentioning Mourinho and United. Mourinho’s been closely watched this season, largely because there’s an enormous amount of schadenfreude in his third season at any club. And the third season woes: they’re definitely there. WIth an ongoing rift between the manager and team star, Paul Pogba (read Jonathan Liew on the subject), and a team that just can’t seem to get it together, United have a goal difference of 0 and have managed to keep only a single clean sheet in 10 games. There have been moments of brilliance from the team, but they’ve been fleeting. Should United have made their kit a darker shade of pink this season? Yes. Would it have done anything to stop the Mourinho curse? No.

Then there’s the teams that just haven’t caught a break this season. Let’s talk about Fulham and that awful white-with-black-label monstrosity they’ve been sporting. When taking mean kit quality difference (kD) into account, Fulham’s many, many losses came with the highest mean difference. They were consistently poorer, in kit and play, than the teams they lost to. Fulham have no clean sheets this season, and they have managed a single win against Burnley. Is this a deserved result for the massive kD we’re seeing? Maybe. 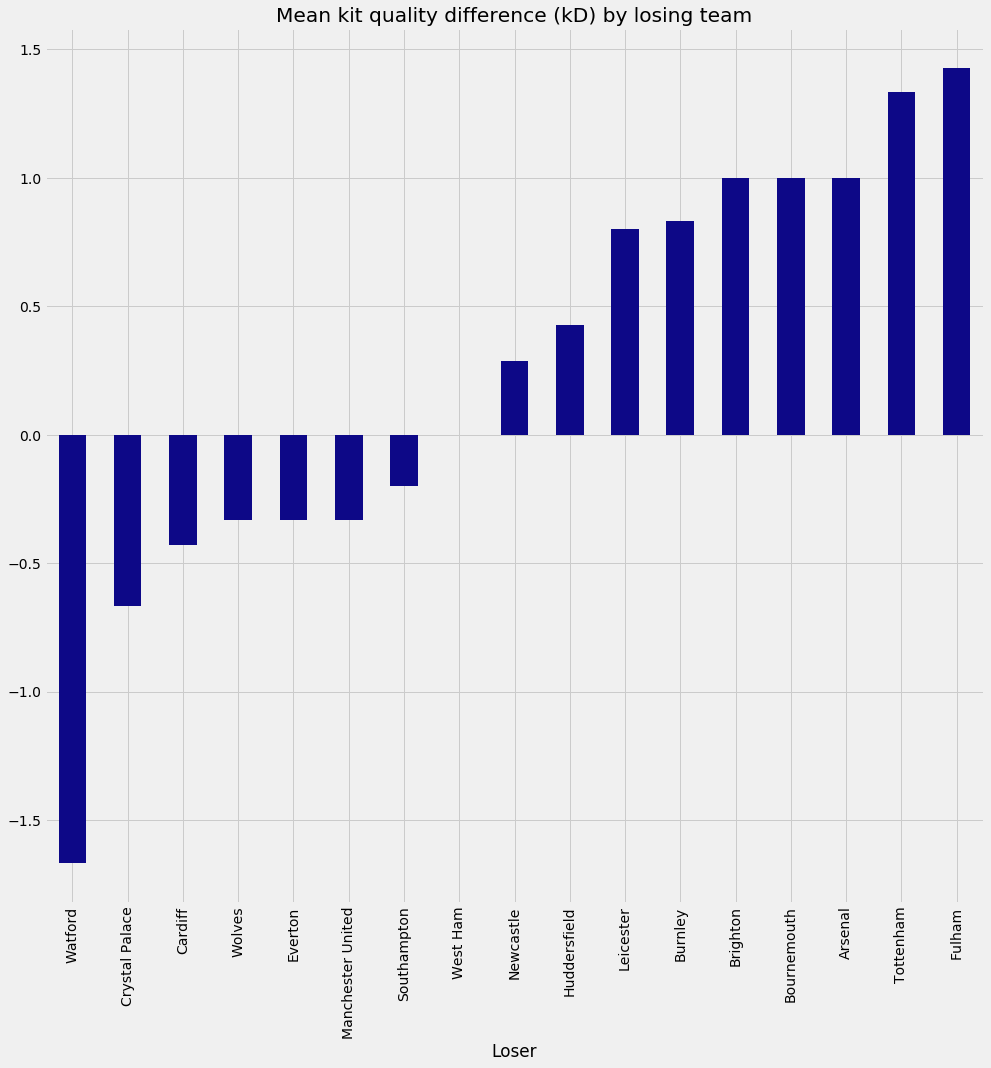 Best dressed team that really hasn’t gotten it together yet

And on the other side of that kD is Crystal Palace: a team that has some of the best kits overall in the league (seriously, just look at them), but is really failing to see that brilliance shine on the pitch. Palace have won just two games and conceded 13 goals, but that’s much, much, much better than this time last year when their kit was a stripe-y mess and they were sat firmly at 20th after a string of losses. Palace have made very few changes to the team that fought their way to a mid-table finish apart from swapping out the bold stripes for a much classier fade, so it seems