The possibly catchy title gives away my intentions that I am hoping to join James Yorke in providing a regular column talking about key games, emerging teams/players, and interesting stats across Europe. I can't guarantee something every week, but let's see how it goes for now. As more stats pile up, there will be stories that involve deeper dives but for now with the sample sizes still small, I will snippet from many different places instead of diving deep into one place that is still too shallow. 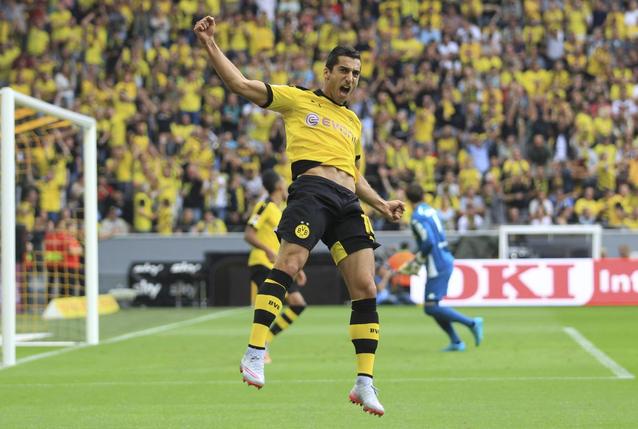 The game of the weekend across Europe was Dortmund absolutely steamrolling Gladbach. For a quick glance at just how dominant it was, look at where each player was receiving the ball (attacking from left to right with Dortmund inexplicably in blue):

Gladbach were the best team points-wise in the Bundesliga after the winter break last season and got absolutely run off the pitch. The Foals set or came near to setting lows in their past 35 games for most completions allowed in the “Red Zone” (final 20 yards or so), highest completion % allowed in the Red Zone, most assisted shots allowed, highest Passer Rating allowed, fewest assisted shots taken, fewest Red Zone completions, etc, etc. So it was a terrible game and a bad start for Gladbach while it was a great beginning for Dortmund, but let’s not get too carried away. For Gladbach there was one other game that stuck out as an outlier when looking over last season, it was also away at Dortmund.

While it is a terrible start, Gladbach at least can remember last year and think about where they finished despite being de-pantsed in Dortmund. The Foals center-back pairing made their top-league debut at 19 and 20 and unsurprisingly looked lost on 3 of the goals and are a reminder that it is very hard to play the way Gladbach do. The Foals had great injury luck last season, this season they will certainly need their first choice backline back soon especially as Fabian Johnson is now out for an extended length of time. Offensively, Josip Drmic did not magically transform into the creative player that Max Kruse was. Drmic was the first player pulled and I’d expect to see a lineup featuring Hazard instead of him at some point in the next few games. Speaking of Kruse, his two assists were the highlight for an unimpressive, stagnant Wolfsburg attack.

For Dortmund the territorial and shots dominance was nothing shocking. Their patience was maybe a bit better, they never topped 10 assisted shots last season and only had 1 better passer rating game (against Gladbach) but again, it’s just one game. This simply re-affirms what the underlying stats told us last year: that Dortmund are the 2nd best team in the league.

Daniel Didavi, highlighted in the StatsBomb Bundesliga preview, unleashed 10 shots as Stuttgart got off to an impressive start against Koln. It was a worrying day for Koln, who played at a relegation level last season, and carried that form over to week 1 in this game. Didavi outshot 6 teams in the league by himself, set up 3 shots from his passes and completed 7 passes either into the box or just outside the box in the middle of the pitch. A triumphant return in the first full 90 since last September for the 25-year old.

New boys Darmstadt and Ingolstadt started solidly, but Darmstadt struggled to complete passes. They wound up trying long balls (30+ yards) on 36% of their passes, 6 full points ahead of #2 and completed just 49.2% of their total passes. Hannover were a good defensive team last season and pressed high, but there will be many tougher games for Darmstadt than Hannover at home. They are a great story, back-to-back promotions on a 3.5 million wage bill, a stadium of 16,500 seats, a city of about 150,000 but a solid shot performance in a draw vs Hannover is not near enough to change the strong opinion that they are set for relegation.

Game to watch this week: Schalke v Darmstadt. At home vs one of the worst teams in the league is a perfect time for Schalke to show they are going to be a more proactive and attacking team and start wiping last years disaster from their fans minds.

In their 0-0 draw on Saturday vs Lille, Monaco held Lille to a 67.4% completion rate on passes that ended 60 or more yards from goal. This was 5 points lower than any game from the previous season and over 20 points lower than last years average. In their opener at Nice, Monaco were well below last years average at 83.7%. Monaco have faced just 328 passes in this imaginary “high pressing zone” so far this season, so it’s something to check back in on later but as of now they are way off the charts in Leverkusen territory.

Last year Rennes were the 3rd-toughest team in Europe to convert deep passes to shots against (Valencia/Atletico the top 2), and they’ve started off in similar fashion (allowed 2nd fewest shots despite facing 5th most deep passes). Attacking-wise they have added left-back Ludovic Baal, who carried an unheard-of load for Lens last season. He led the team in passes/game from left back and helped create probably the most unique completion map in Europe:

The biblically named Baal has assisted both Rennes goals so far. He could be getting help soon as Yoann Gourcoff seems on the edge of signing with Rennes.

Angers have been mighty impressive for a newly promoted team, posting the league's best TSR and taking quality shots against Montpellier and Nantes but it was fellow promotee Troyes who enjoyed the best moment so far. The strangers to Ligue 1 came back from 3-1 down to draw with Nice, spurred on by this truly absurd run and goal from the midfielder Camus. Mother died today. Or maybe it was yesterday; I can’t be sure. I can be sure that this was the goal of the week.

Game to watch this week: Lyon v Rennes. The afore-mentioned Rennes are the toughest team to get shots off in the box against and Lyon struggled with that final link into the opponents box last year. Valbuena has joined Lyon since I wrote about them in the Ligue 1 Preview, so tune in and see if he can be their missing piece.

Taking a page from James Yorke's recap, I will try to throw in some interesting chart/table/general stat I have here each week. This week it's the odds of a completion turning into shot by league:

An idea once came to me that if expected goals is better than goals due to the larger sample size of shots, then why can't a larger sample size of dangerous-area touches lead to an expected shots model? This eventually led to my article on converting dangerous passes to shots. As you can see from these graphs, a model for "expected shots" doesn't seem feasible to me currently because of how widely teams and leagues vary in converting these dangerous touches on the surface. Maybe distance, speed of attack, or something else can explain the difference here. If someone can explain this difference or even have any theories, please let me know. Right now, I assume it has something to do with number of defenders in the box but it's a research extra, not something I have looked deeply into the why of.

Arsenal are dominating territory way ahead of the pack in the early going.

Chasing the game against West Ham helps build this total but Arsenal are off to a strong start. As noted everywhere else, Chelsea are not.

Leicester have had a very interesting statistical start. They've had a 30-21 shot edge in two victories, and aren't taking potshots to run up the totals, shot map below:

This comes despite their bottom of the barrel 68% completion rate. They aren't trying especially hard passes either, nothing like Darmstadt's crazy 27 yard average length. As with most things this early, it's something to watch.

Game to watch this week: Arsenal v Liverpool. Can Brendan Rodgers name the exact same starters for the 3rd straight week simply because they ground out ugly 1-0 wins that covered up glaring weaknesses? Tune in to see, and expect a repeat of last years romp if that happens.

Hope you enjoyed, if you have any theories on the assisted shot/completion mystery let's hear them in the comments below or on twitter @Saturdayoncouch.